How I got into Freelance investigative journalism

Home / How I got into Freelance investigative journalism

I’m a freelance investigative journalist and I’ve been working all over Africa for about a decade (check my latest stories on www.emmanuel-freudenthal.com).

I occasionally get asked for advice on how to become a freelance investigative journalist, so I thought that I’d share some tips here. These are my own views, based on my career path, so take this with a grain of salt, and let me know what you think!

A word of warning: it’s clearly not a good time to move in journalism, there’s no money, many newspapers are firing staff, and yet lots of people want to become reporters. Nairobi, for example, is full of independent reporters trying to make it. It’s really tough to succeed. That said, it’s a really fun job where you get to dig deep into whatever your curiosity fancies.

Many journalists have started by studying this subject at university, which is probably a good approach. If you’re in your early 20s and thinking of getting into media, I think that would be your best path. It’ll make sure you know the basics of the job, get some practice, learn from your mistakes (without consequences), meet people within the sector, and give you some time to think about your plans.

I didn’t study journalism, but sometimes I wish I had. My own path was to get two degrees in Economics/Finance and Anthropology, then work for NGOs for about 7-8 years doing investigations all over Africa, both as staff and a consultant. So, when I decided to become a freelance reporter, I already had some valuable experience under my belt. Several journalist friends told me I wouldn’t make it, and I didn’t follow their advice, but it was good to know that it would be tough.

There are three main challenges to be a freelance investigative journalist – one for each word. Here are the steps you need to achieve:

Trawl through twitter to find the dozens of threads by freelancers complaining about their lives (including me, at times) to see that it’s not an easy ride. You have to run a company on your own, which means budgeting, invoicing, finding clients, promotion, negotiating rates, getting paid, managing your time, not getting scammed, etc.

The additional hurdle is that freelance investigative journalism is badly paid. For example, you might get $180-$250 for a feature article that takes you several days of work. When you begin, you’re unlikely to be very efficient time-wise so you’re likely to earn less. To give you an idea, my income was halved compared to my previous NGO jobs and the work is much more challenging.

If you’re doing investigations, being a freelancer makes it even trickier because you’ll have to invest time (and sometimes funds) into stories that might not work out. My worst financial return was about 3 months of full-time work for $500 at the end (but I don’t regret it because I really wanted to publish it!). It’s crucial that you keep an eye on your income vs time spent on projects so you don’t get carried away into financial dead-ends without being aware of that.

You’ll also get work propositions for “exposure.” After I spent a week with an Ambazonian armed group in Cameroon, which was quite risky and expensive, I got lots of request for footage, for free. It’s up to you to decide if it’s worth it and to ask yourself whether what you’re producing is valuable. You should also think about the impact on the sector (and your colleagues) when valuable content is available for free.

Many freelancers rely on savings/parents, doing jobs on the side, or living very cheaply. For example, photographers often take “commercial” work such as taking photos for NGOs or companies. Some journalists also work for due diligence or security advisory companies. This work can be fraught with conflicts of interest- it’s very very well-paid though – so you’ll have to decide where you draw the line. Personally, I don’t take those jobs because you often don’t know who your customers are, and my priority is journalism. Instead, I rely on not spending too much.

Because you’re likely to struggle financially when you start, one key advice is to have enough money in the bank, or to slowly transition into journalism while you continue another job.

Investigations require more funds than short pieces, because they take usually take longer and you sometimes need to travel to interview sources. That said, there are stories that you can do desk-based, for example this story an Australian company bribing the family of Congo’s president didn’t need travel. Newsrooms rarely have substantial funds to cover fieldwork, especially by freelancers.

According to this survey 84% of the independent journalists subsidised their investigations, and 70% supplemented their reporting. Nevertheless, you can find grants that’ll help with that, see for example this list of opportunities on IJNet and this one on GIJN. 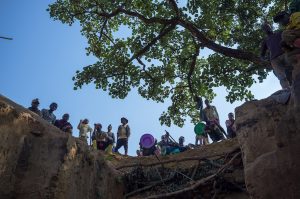 Because you’ll be on your own, it’s important to try and find friends that can advise you. Ideally those will be more experienced than you – the fabled “mentor”. Here’s some tips to find her/him; I never succeeded, but maybe you will! You can also get advice from various colleagues and friends. That’ll also enable you to get a reality-check if you’re not sure about what you’re doing.

Upsides of freelancing: you can pick your editors. If one doesn’t like your story idea, you can just go to another. You don’t need to go to an office, queue at the coffee machine or sit through boring weekly meetings. As your own boss, you can decide on your schedule and the work you’ll be doing.

If you didn’t study journalism before then I’d probably suggest that you try to get a job at a local paper for a while and learn the basics. I’d also recommend reading a book on writing investigative stories. When I started, a friend advised me to buy The Art and Craft of Feature Writing by Blundell and I still use it regularly. There are many website with tips on being a freelance journalist, those are useful (like this one or this one by Glenn Greenwald), but it’s better to have an overview to make sure you don’t have blind spots.

Before you get started in freelance investigative journalism, think about the key things that’ll make you stand out – what patch of news will you excel at covering?

You might know a rare language, have experience in a specific industry, rare connections with individuals, know a region back to front, etc. If you’re amongst a hundred journalists with the same profile in same place, it might be tricky to find your niche (not impossible, but much harder).

Several people from the US and UK have asked me for advice on working abroad. You need to ask yourself what specific skills you’ll bring in a country, especially if you know nothing about it to begin with. It might be better to start closer to home where you have connections and a lifetime of understanding the culture.

If you really want to go abroad, then I’d pick a country where you can speak the local language, where there’s no other journalists (or very few) and where things/news are happening. If you satisfy those criteria, you’ll have information nobody else has and that outlets want to publish. It’ll be a lot easier to sell your articles. It’s likely that the places that fulfil those criteria are some of the hardest countries to live in, but there might be exceptions.

Upsides of journalism: you get to look into topics that interest you and learn a lot about the world. You have to be very rigorous, but there’s a substantial artistic part to the work (writing and photos). If you’re lucky you’ll travel to places you wouldn’t go to otherwise. You’ll often meet and talk with really interesting people.

Investigative stories are not easy because you’ll be exposing something that some people will want to keep hidden. That means, you need to work extra-hard to uncover the facts. It also means that your story will be closely scrutinised and if you make a mistake you could even end up in court (so make sure you know the relevant libel laws).

I have trained dozens of journalists in investigative techniques, and one of the key challenges they usually face is to come up with ideas for investigative stories. Those have to be both a) interesting and b) doable.

Some stories are boring. You need to think if the story is exciting to you, and constantly ask yourself “so what?” For example, if the country’s richest man is building a factory somewhere – so what? What makes this interesting? What’s unexpected? Bounce your idea off some friends to see if they’re interested or if their eyes glaze and they switch conversation topic.

Some stories are good but not doable. For example, sometimes journalists suggest they want to do a story on their President’s corruption. Ok, he might well be corrupt, and revealing it would be a huge story, but how will you prove that? If you can’t prove it, you don’t have a story.

You also have to be stra

tegic in the stories you pick. Most investigative stories will require a leap of faith. It’s very rare you get a leak with the story served on a plate. Instead, investigations usually start with a computer, looking at open-source documents on the web, maybe talking to a few people in the field. You’ll have to know how much work to invest in the story before pitching it to an outlet.

As a freelance investigative journalist, you’ll have to balance between convincing editors that the story exists with the risk of investing days/months into a story that will not bear any fruits. It’s a balance and a ‘nose’ you’ll acquire with experience.

There are endless things to learn about investigative journalism: open-source research (like Bellingcat), data journalism, financial investigations, etc. Each of those come with their own tools. And it’s often good to partner with people who are expert, or to learn some of the basics yourself.

Upsides of investigations: you get to dig really deep into a topic. You find out things that powerful people are hiding. It’s often useful to society to reveal those things. Overall, it’s pretty exciting.

You’ll need to keep acquiring new skills, new tools and new ideas to remain a freelance reporter. Each story builds your reputation, and you’re gaining skills each time, but you’re only as good as your last story and your next pitch. That’s perhaps one of the greatest challenges of freelancing – you need to prove yourself all over again every time.

I hope this has been useful. Want to become a freelance investigative journalist? Still hesitating?

Don’t hesitate to contact me if you have any feedback or questions! Please just make sure you contact me for something specific that you cannot easily find on google.